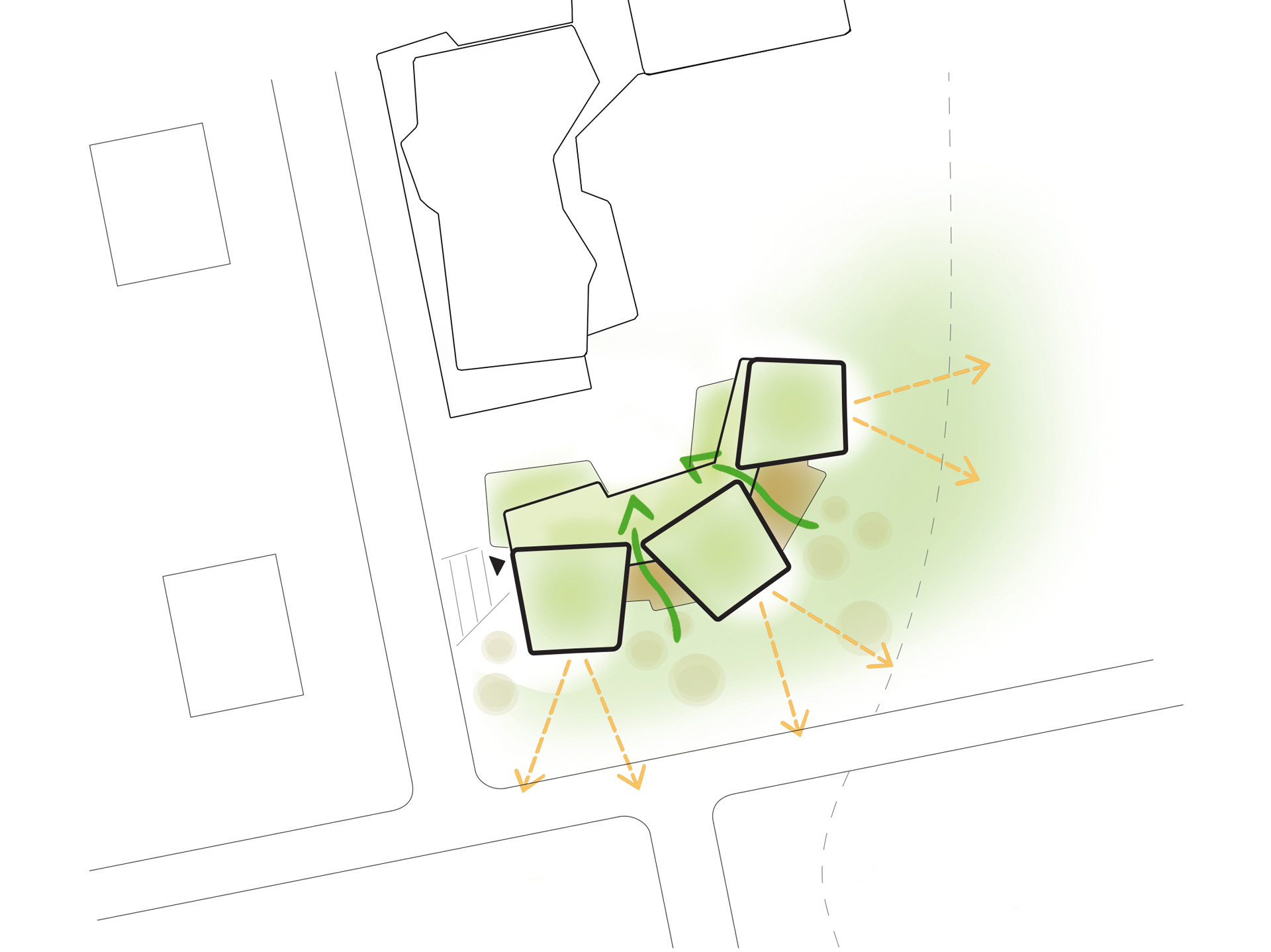 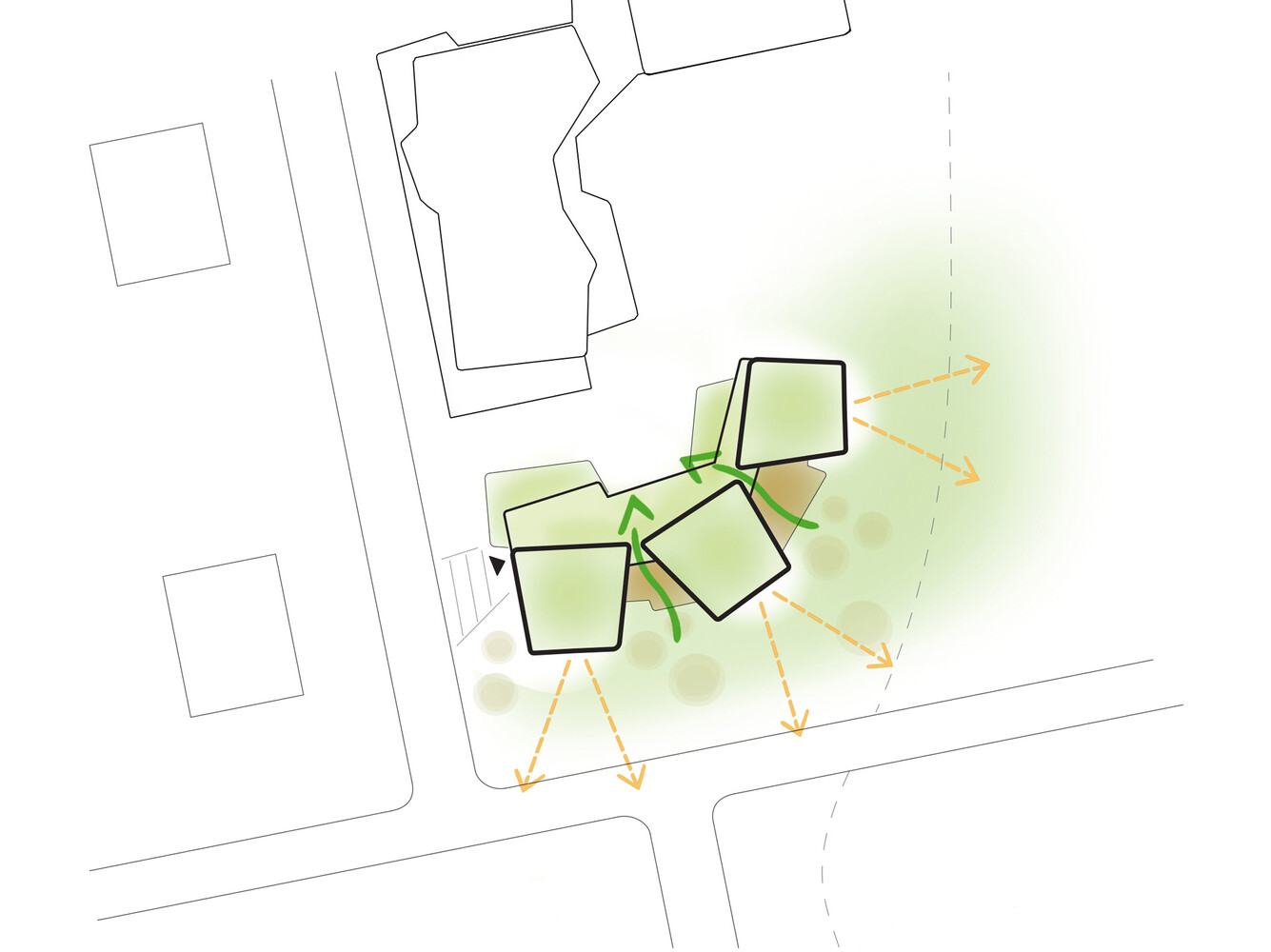 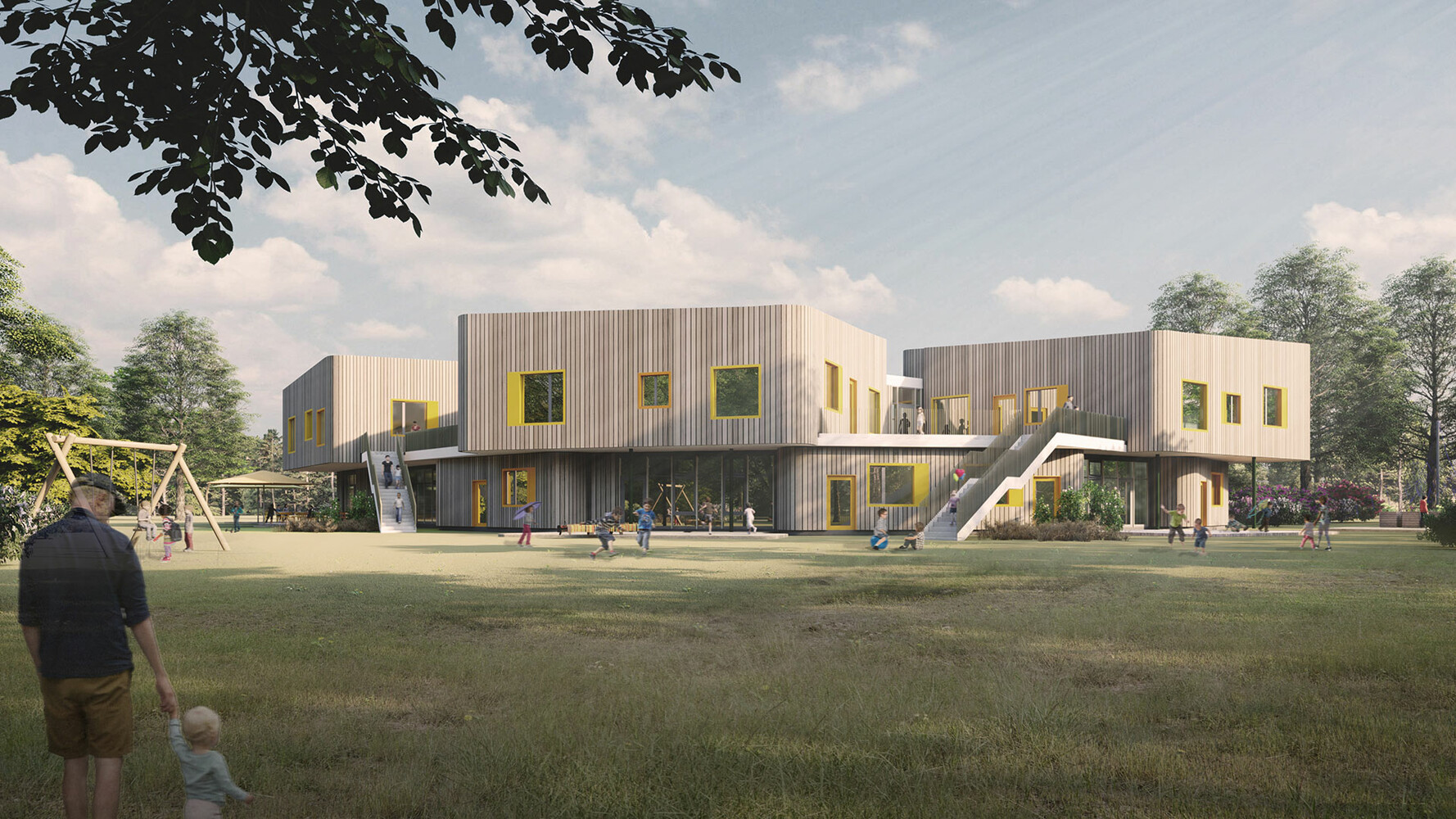 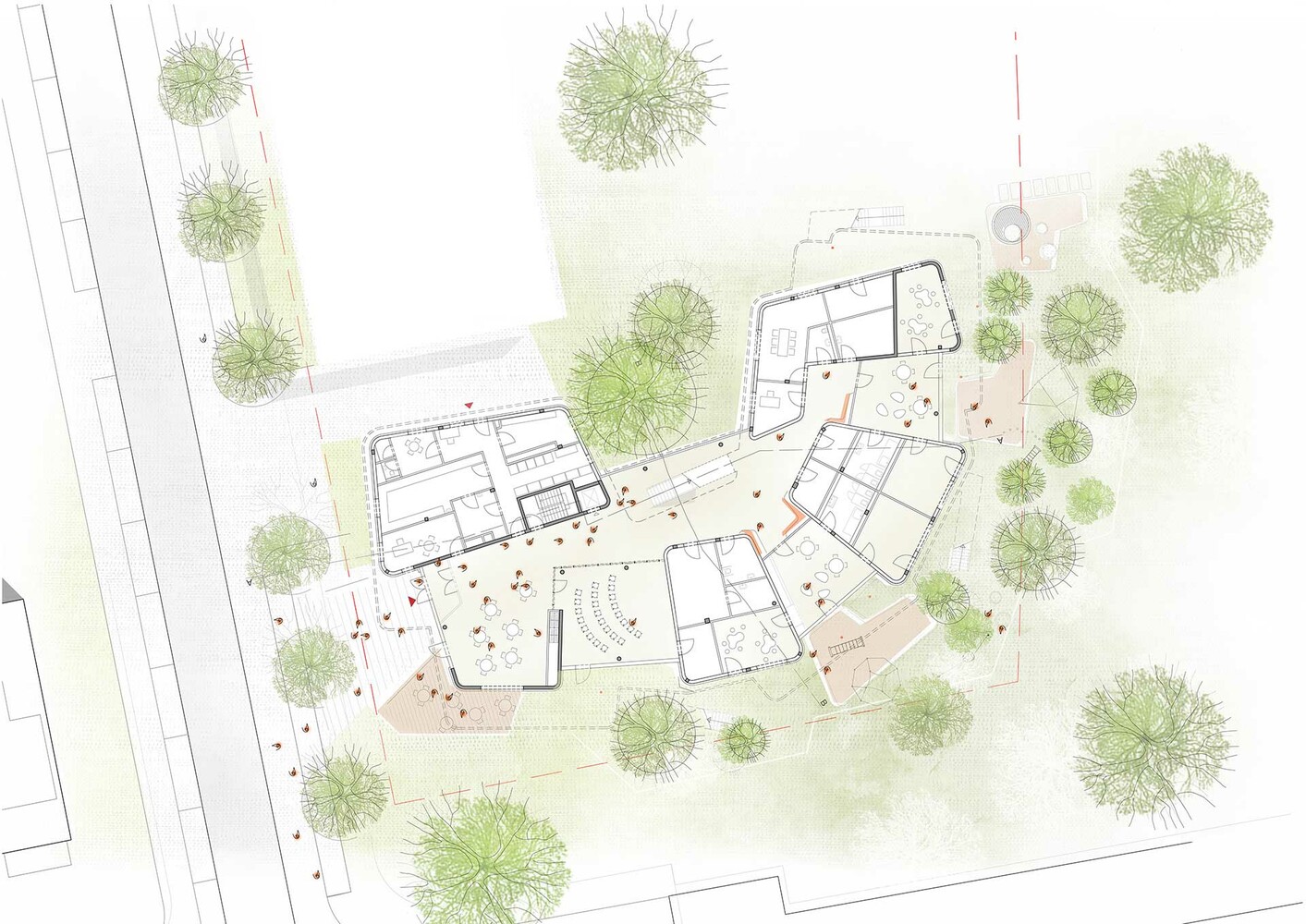 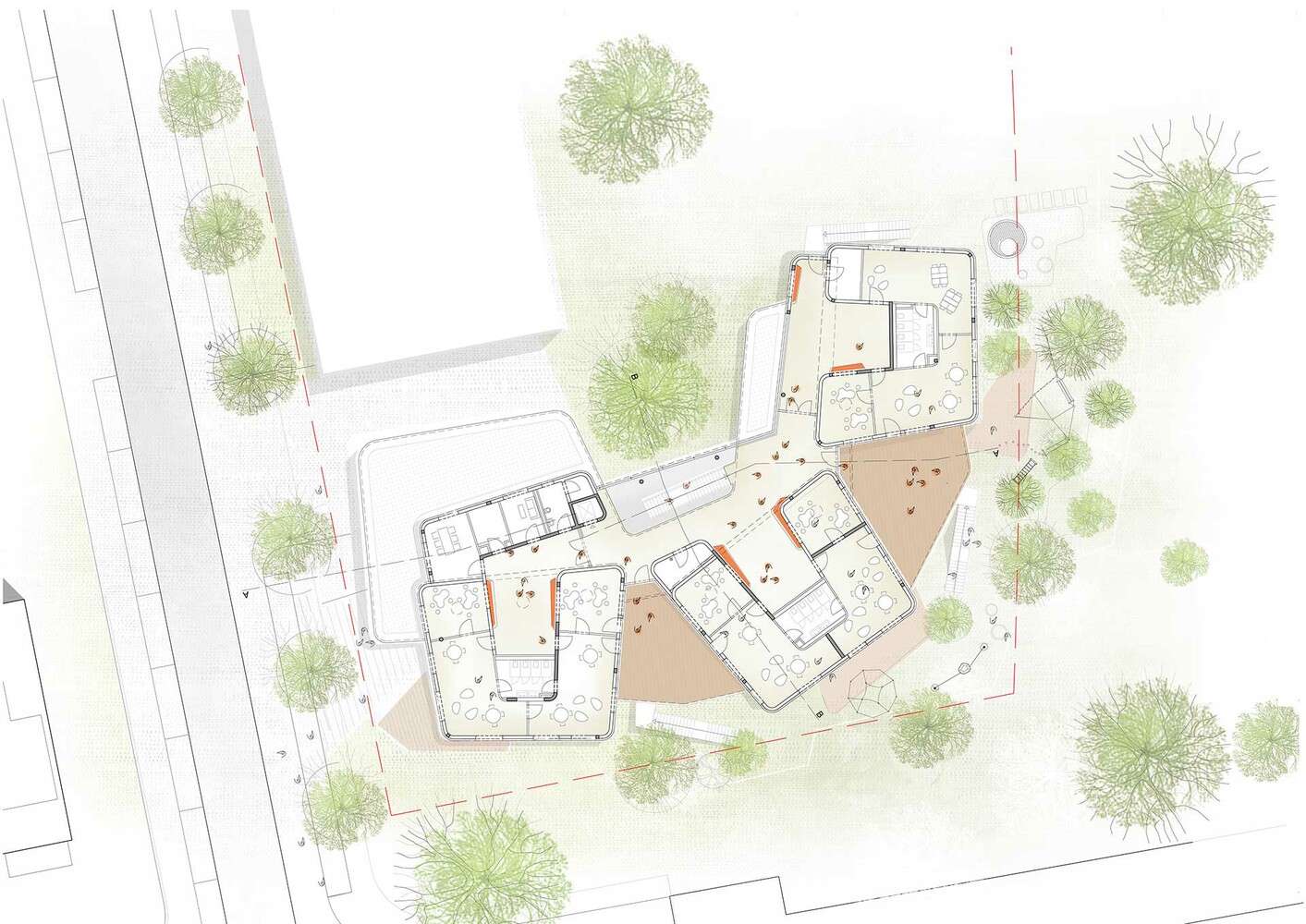 Pioneer Park in Hanau’s Wolfgang district has been designed to be part of an environmentally friendly and sustainable urban quarter of the future. This idea is reflected in the childcare concept “Garden Gnomes: The Green Day-Care Center in the Pioneer Quarter,” which focuses on nature and the environment.

The design of the new building should enable the subsequent day-care center to take maximum advantage of the natural qualities of the nearby green space. The ideal location to achieve this is the lot on the eastern border of the Pioneer Quarter, directly adjacent to the Kleine Bulau forest. The site has a total area of more than 10,000 m²: its northern portion is to house a three-room primary school with a gymnasium, while the southern part will be given over to a day-care center providing space for 155 children aged six and under.

The three-section, two-story structure dovetails superbly with its green surroundings. Key functions are housed on the ground floor, such as the multipurpose room and bistro, which are directly adjacent to the western entrance. All the group and recreation rooms face south, with views of the woodland area, and are accessible from the northern side. The access areas expand out into the group spaces—rather than having the feel of closed corridors, the circulation areas are broken up by cloakrooms with seating and lockers, creating wood-paneled entranceways that are flooded with light. Here one finds the toddler group rooms situated between the adjoining sleeping areas, multipurpose spaces, and washrooms. Their transparent glass facade allows the children to experience nature in all different kinds of weather.

Children aged three and over are put together in twin units on the upper floor, where subtle changes in the angling of the different elements of the building maximize each group’s view of the woods. Every room has access to a terrace, which can be used as an outdoor play area and also serves as an emergency escape route.

The way in which the individual groups are organized is also reflected in the external facade clad in wooden slats, with projecting and recessed sections creating different spatial environments. Large windows—some of which include inset seating niches—and ledges of a suitable height offer an inviting spot for the children to sit or play. The roof areas are extensively greened as a continuation of the overall nature-friendly concept.

The design, which was based on a reinforced concrete skeleton, will be implemented as a hybrid construction including pillars and glass. Innovative support elements and structural features help reduce the amount of material required for the construction process.