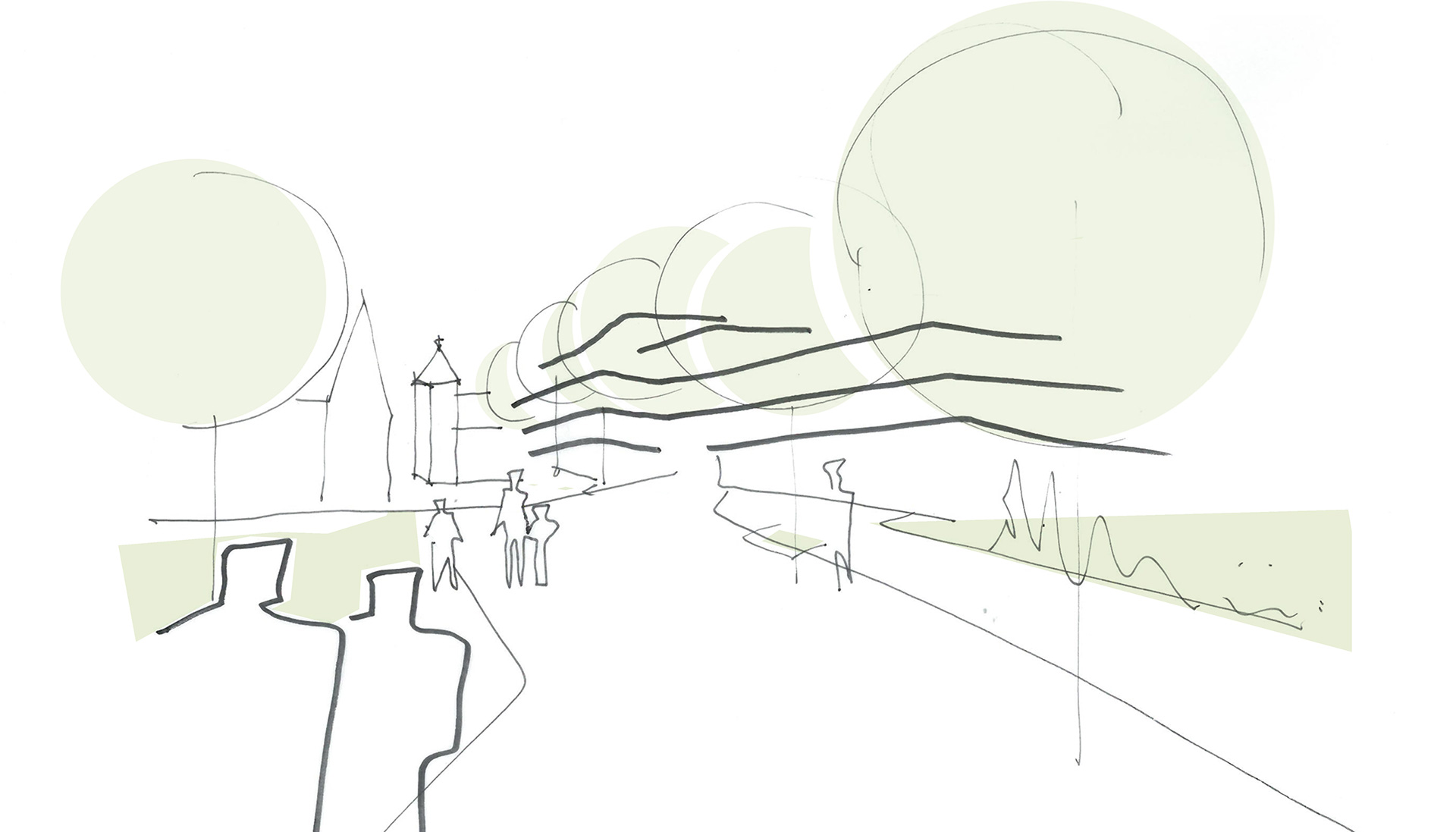 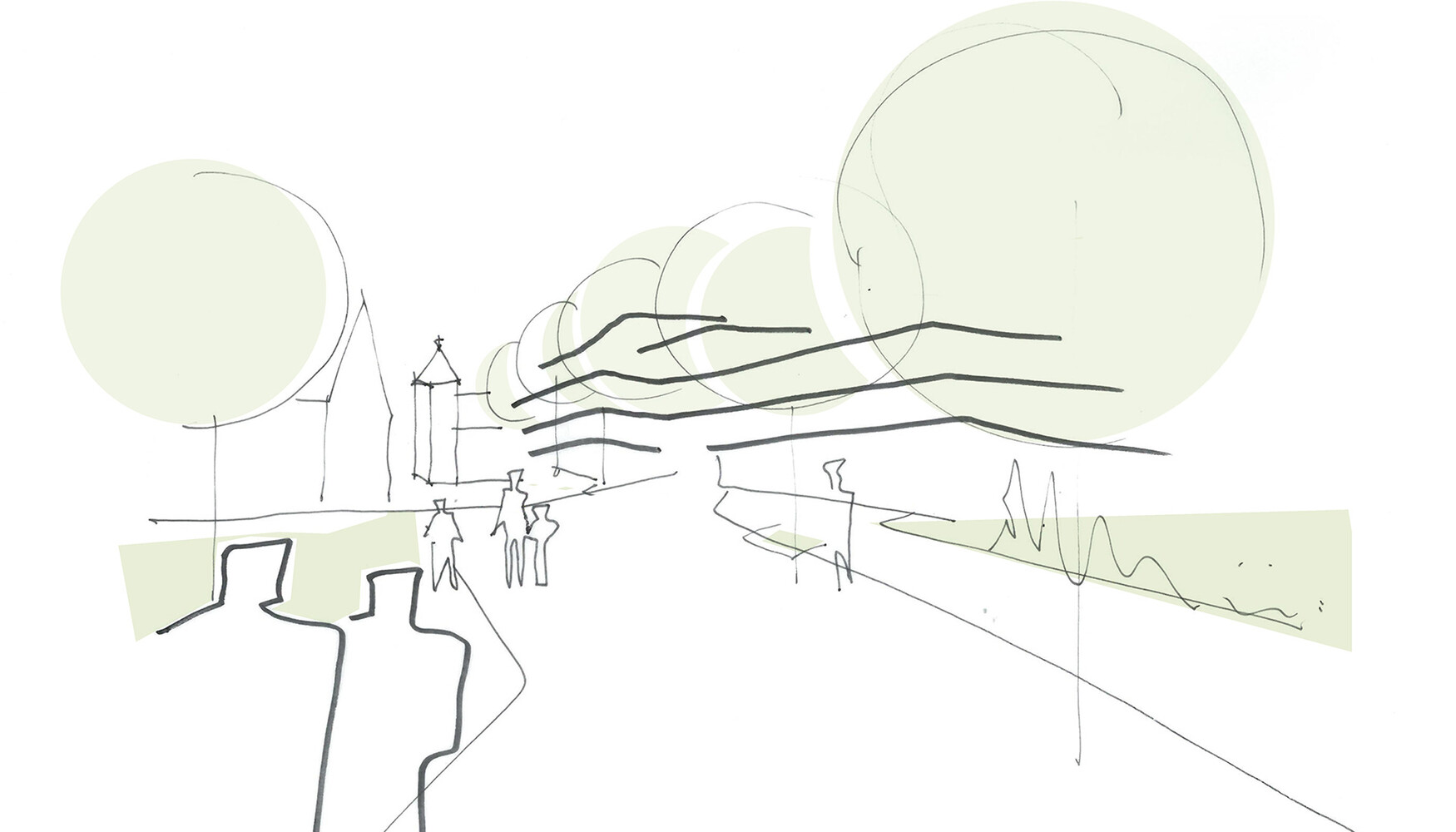 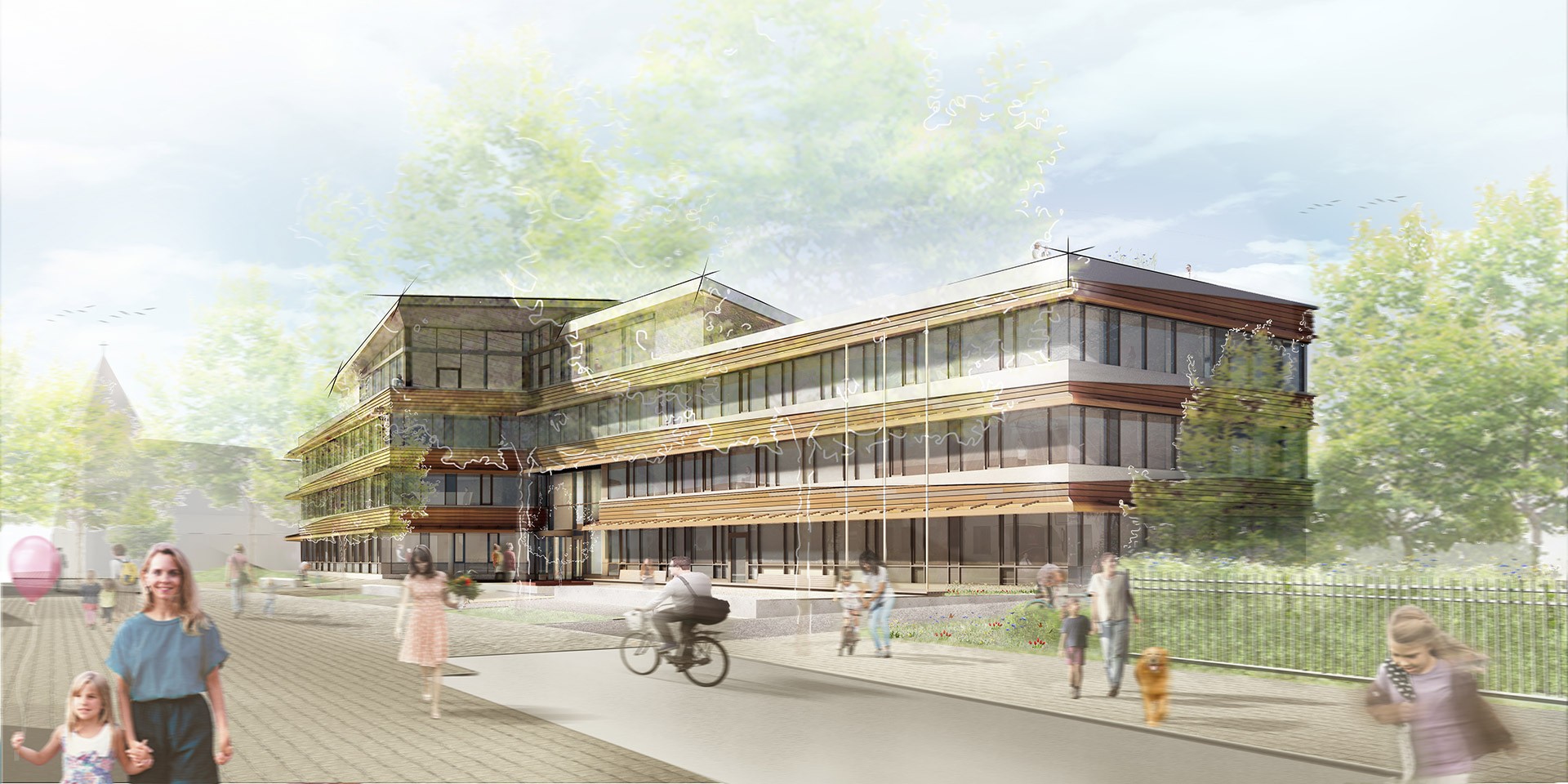 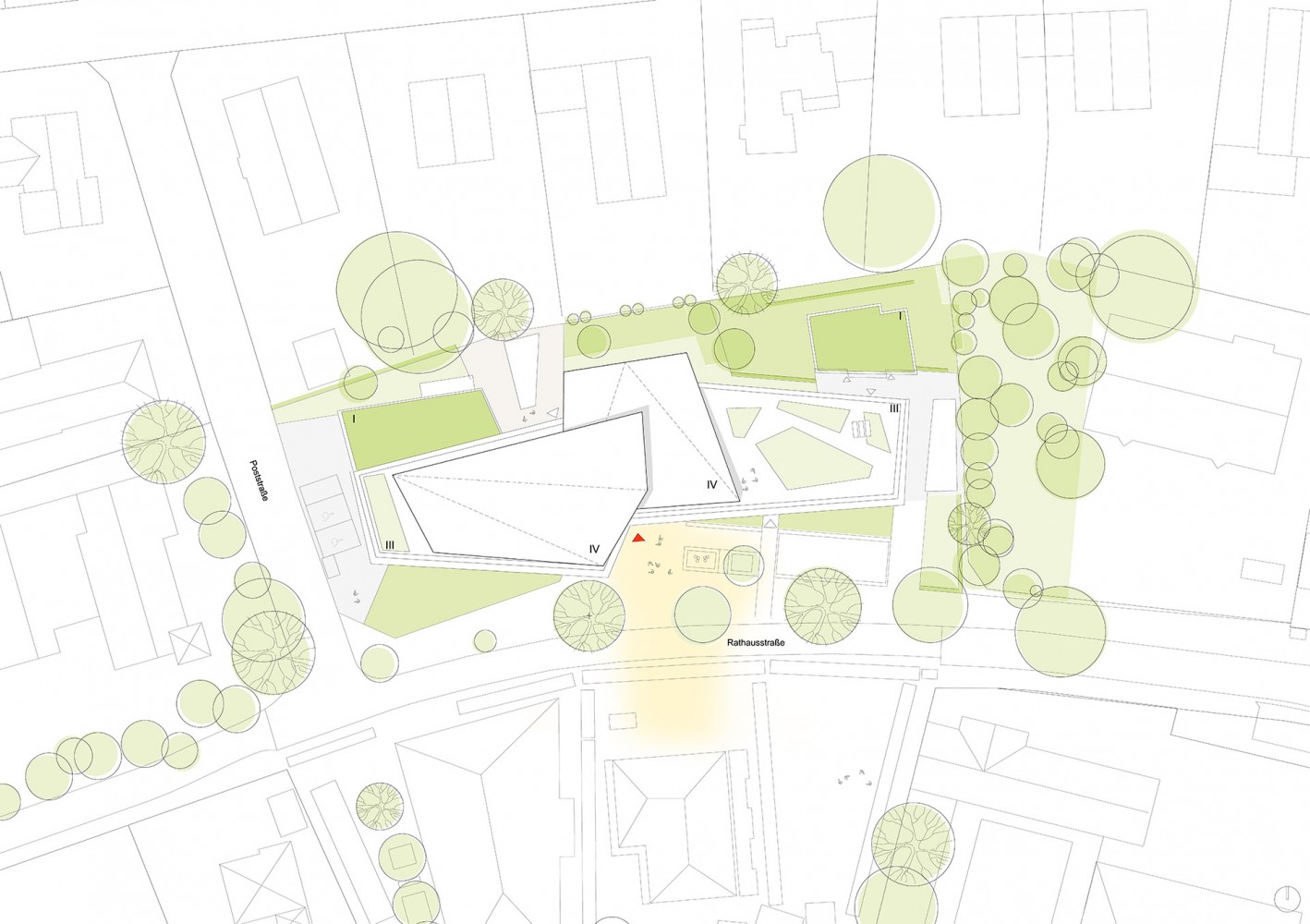 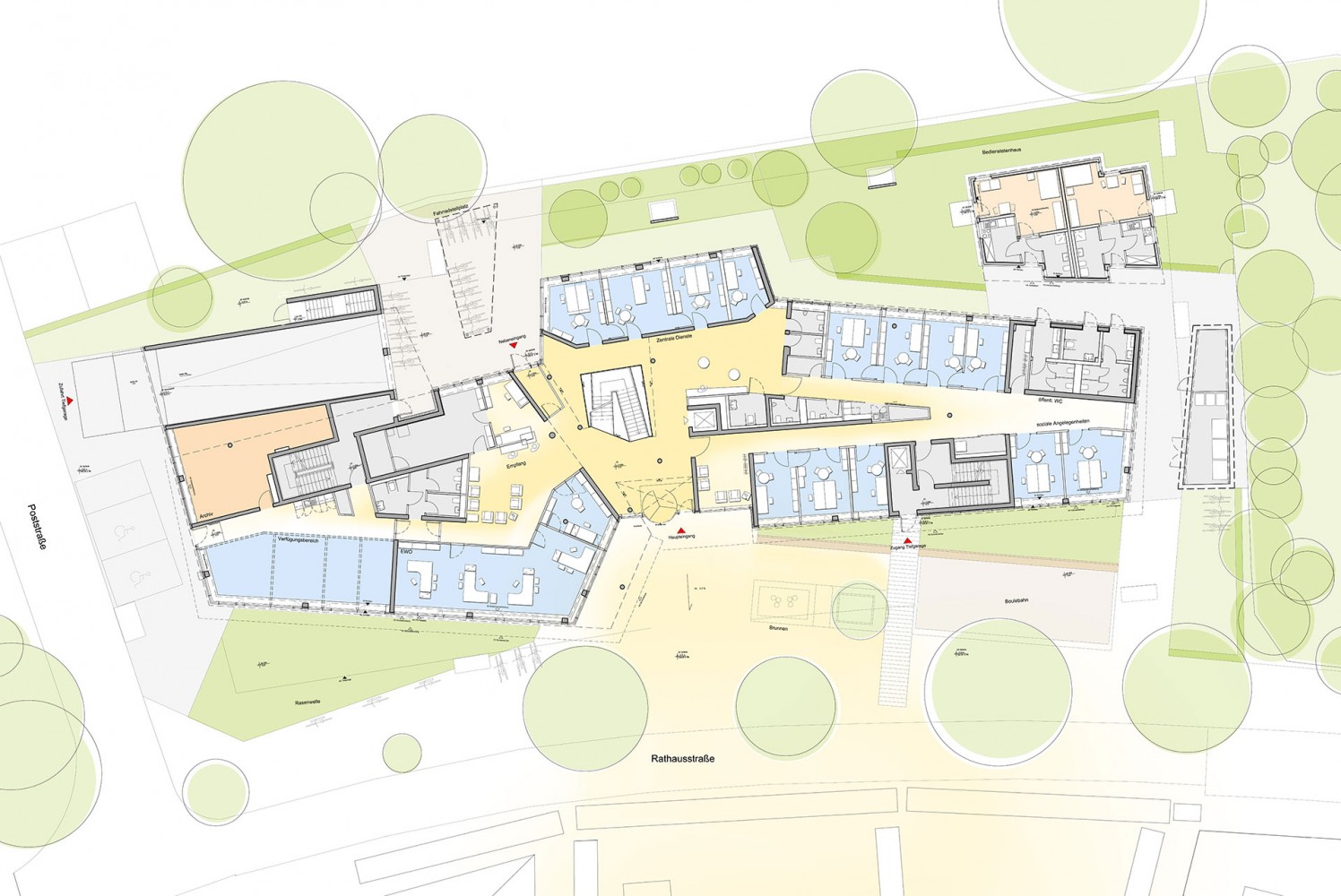 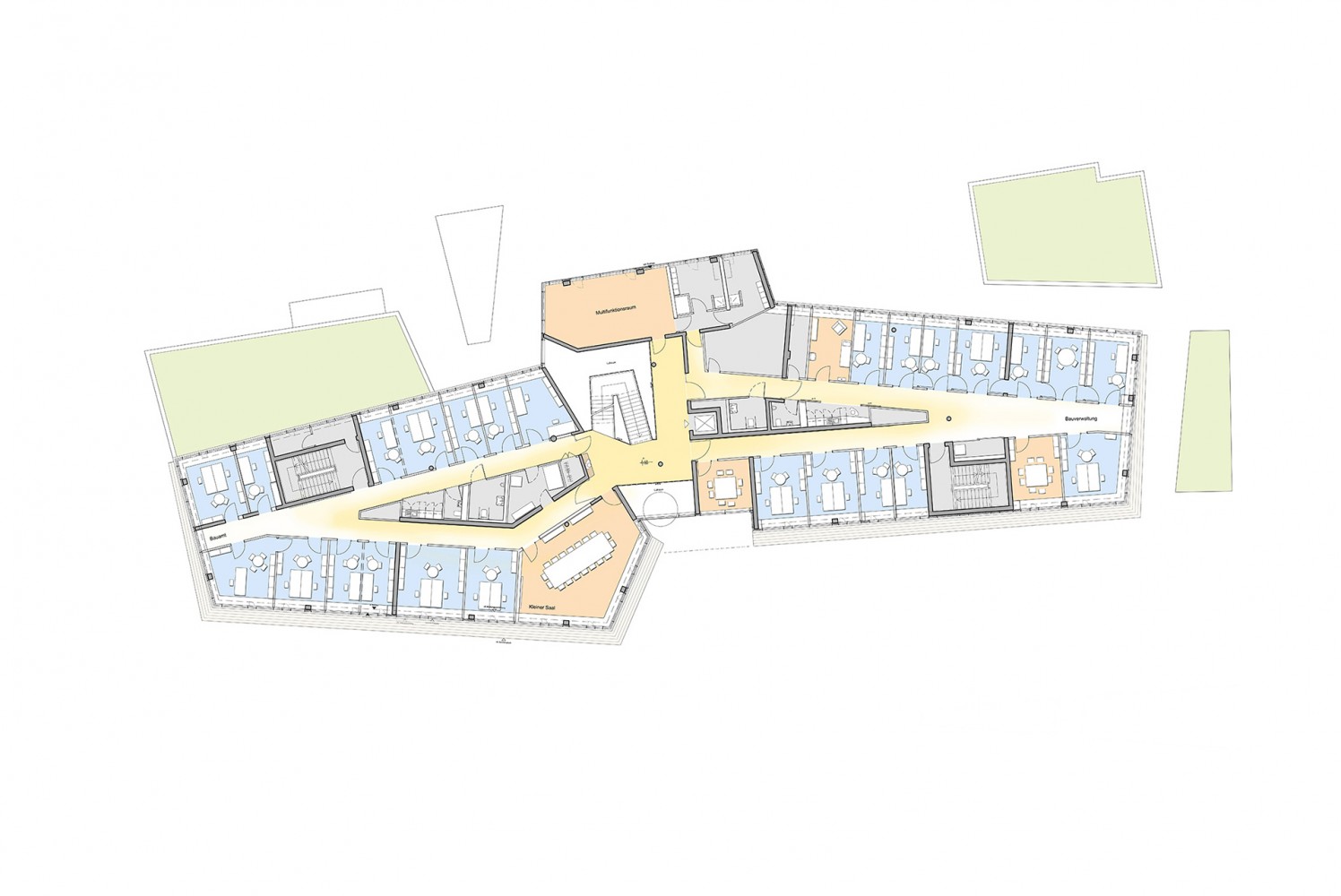 The site for the planned new city hall building is situated in the town centre of Gröbenzell, surrounded by two churches and a public square that is used for markets and events. The community of Gröbenzell is a residential municipality. With its small-scale structure, set among greenery, it has the flair of a garden city. The immediate surroundings consist primarily of single-family and terraced houses.

For functional, economic and urban planning reasons, it does not make sense to preserve the existing city hall. The new building will be considerably larger, however at the same time it should not be overpowering in terms of scale. Protruding and recessed volumes, as well as differentiated building heights, ensure that the building is incorporated harmoniously into its surroundings.

In order to fulfil the wishes of the client, the new city hall should convey transparency, democracy and openness towards citizens’ concerns. On the one hand, it should be functional, while on the other hand it should appear as a special and particularly important public building. The building can be accessed via a spacious central zone, which, in addition to the access facilities also provides space for unofficial functions. The individual functions have been appropriately aligned and linked together in a wide range of different ways. The differentiation between public areas and those not designed to accommodate many visitors, is an important factor.

The citizen’s advice office, registry office, the central services and the public toilets are located on the first floor. A separate office area with independent access can be functionally linked to the city hall at a later stage.
The first floor houses the building authorities, the Department of Civil, Structural and Environmental Engineering and the health and safety facilities with changing rooms. The second floor contains the main office and the office of the mayor, the financial administration and the employees’ recreation room.
On the third floor, the assembly hall and the civil registry room unfold their form and function more freely than the strict grid of the office spaces. They are grouped around a central stairwell. As they do not require so much space, they do not occupy the whole floor area, hence leaving room for roof greening and terrace areas. From there, the view extends across the city hall square, beyond the church spires, as far as the surrounding developments, giving the area the desired special flair.

Auxiliary rooms such as storage spaces, technical rooms and archives, as well as the underground garage with approx. 55 parking spaces, are situated in the basement. An autonomous building, separate from the city hall, is planned for the caretaker’s apartment.

The open spaces are based on the model of a garden city with a large amount of greenery and only a few paved squares and paths. The Rathausstraße will remain a traffic-calmed area while the square, which has already been installed, extends across the Rathausstraße and is bordered by the new building. A new fountain, which will incorporate elements of the existing fountain, will be constructed in front of the city hall. The trees will be preserved.

The façade consists of continuous strips of glazing and casement windows without lintels in order to maximize daylight entry. The closed parapets are clad with wooden elements of mature silver fir, creating a warm and pleasant ambience. The formwork of the parapet creates a static sunscreen and hence a movable sunscreen device is not necessary.

The climate and energy concept should not exceed the specified energy standards. When choosing the materials, care will be taken that the production, instalment and waste disposal only generates low levels of energy consumption and noxious emissions.